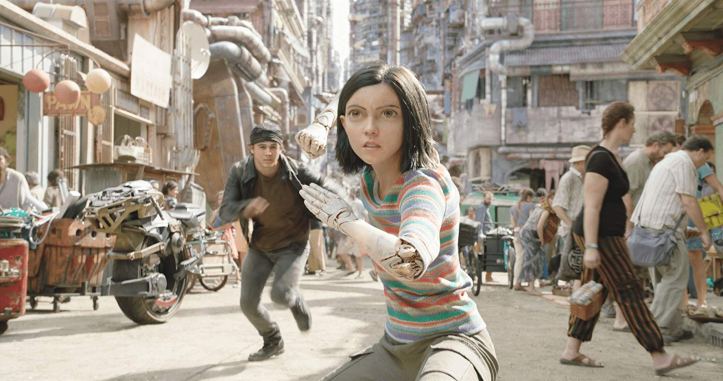 Just as I started writing this review, “Alita: Battle Angel” hurtled past a major box office milestone, earning $380 million dollars since it first premiered on Feb. 14. While highly notable, there is still concern about whether this high budget film will be able to break even. Rumors about producer James Cameron and director Robert Rodriguez lastest film have swirled and some are reporting it took an estimated $500 million dollars to bring “Alita” to life. And I mean that in more ways than one.

The movie is based on a manga series called “Gumn.” While, unfortunately, carrying many of the tropes manga, Rodriguez does his best to give audiences a heroine and world equally full of wonder and violence. Alita, the titular character played by a brilliant Rosa Salazar, is a cyborg given a second chance at life…but experiencing it for the first time. Unable to remember where she’s from or who she is, Alita is at first a naive young teen who soaks up the colorful brilliance of Iron City (the only city left after some sort of cosmic war) and its inhabitants like a sponge under the watchful eye of a paternal Dr. Ido (Christoph Watlz). Above Iron City, floats some sort of oasis metropolis the dwellers below can only dream of living in. But this is a mere subplot the film but uses as a motivator that’s rarely fully explained. Once Alita begins to search for her past, she begins to realize how troubling the present is and how she is a true warrior — one built long ago to challenge the presence of evil that still exists.

The bumpy script, numerous cliches, and lingering unanswered questions are largely overridden by Rodriguez’s fluid and almost playful action scenes. As Alita’s perspective of the city changes and its villains shift out from behind the shadows, the fights become much more intense and Alita’s pure, mechanical heart keep everything pounding along. Her anime-style wide eyes and posture are the true physical reactions of Salazar who makes the audience empathize with a cyborg’s joy, frustration, love, bravery and determination to write the wrongs of a people not her own. Alita bursts onto the screen and is, despite the many detours and lack of logical explanations, an action-packed and visual triumph.