WARNING: Spoilers incoming. If you haven’t seen The Long Night, turn back now!

The biggest episode of Game of Thrones yet answered a lot of questions, raised a few more, and included the longest continuous battle sequence ever put to screen on TV or film.

The episode relies heavily on character work that’s been done throughout the 7 seasons leading up to it, and as a result, very little (if any) character work is done. This is purely a battle. THE battle. The battle the show has been telling us is the only one that matters. The dead vs the living. 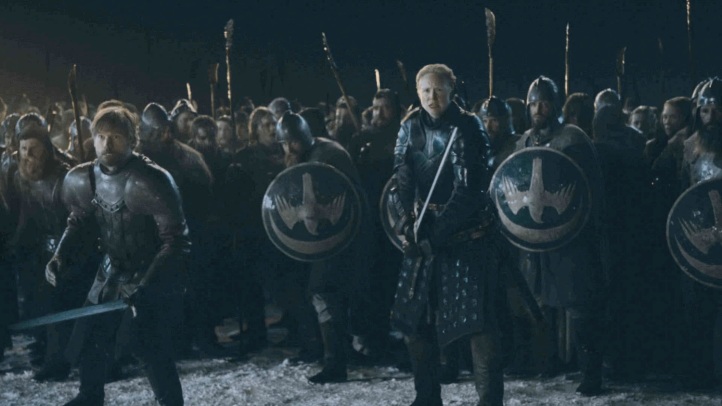 Let me start off by saying the episode was brilliantly shot and extremely intense from beginning to end. This was a spectacle befitting of the big screen, and it’s a shame it didn’t get a theatrical run. But there are a number of problems that have to do with the execution and the story that kept it from being the episode we deserved after 7 seasons of buildup.

Despite the spectacle, the episode was dark, muddy and difficult to see. The action was hard to follow. And far too many characters got lost in the shuffle.

We’re living in the age of Avengers, where big teamups full of recognizable characters. And each of those characters get their own individual moment in the midst of huge battle sequences made up of many moments. Somehow or another, the directors of the Avengers movies manage to pull these battles off without losing track of each of the characters.

By contrast, “The Long Night” feels barely comprehensible. Characters like Brienne, Jamie and Sam get swarmed by dead bodies to the point of being pushed up against a wall (a literal no-win situation), where they stay for nearly the entirety of the battle – but none of them die. We lose track of Grey Worm, Tormund and others never to check back in on them again. We lose track of Jorah and Melisandre so badly that they seem able to appear as if from nowhere whenever the script needs them to be in a different location. And that goes without mentioning the moments when the living characters we don’t recognize get swarmed and killed by overwhelming numbers of undead. At certain points it’s just bodies slamming into bodies

Jon and Dany spend much of the episode flying blindly through the fog of war, and get sidelined altogether for the final encounter with the Night King. All of this would seem to indicate that the showrunners were in over their heads and didn’t know how to handle so many characters in such a huge battle. So they pinned most of them against a wall left them there for the rest of the episode, did nothing with the people hiding in the crypts, and concentrated almost too long Arya sneaking around.

And all of this pales in comparison to the biggest mistake the episode made. That mistake is giving Jon’s final showdown with the Night King to Arya. Why would Arya be the one to kill the Night King? It’s a gotcha moment that isn’t narratively satisfying in the least.

Yes, the show had left little hints that Arya would be the one to do it. Way back when, Syrio Forel asked her, “what do we say to the god of death? – Not today.” Then Melisandre echoed those words (how could she know these words, or that they’d mean something to Arya? – who knows), clearly indicating that Arya was to tell the Night King (the god of death), “not today.”

In season 3, Melisandre left Arya after saying, “I see a darkness in you. And in that darkness, eyes staring back at me. Brown eyes, blue eyes, green eyes. Eyes sealed shut forever. We will meet again.” We now know this to mean the blue eyes of the Night King.

We also see Baric Dondarrion sacrificing himself to save Arya, fulfilling his life’s purpose (the one the Lord of Light brought him back multiple times for) so that she could kill the Night King.

It’s also turned out to be no random occurrence that Bran specifically gave the Valyrian steel dagger to Arya with a knowing look on his face.

And yet, I still say Arya being the one to kill the Night King doesn’t make any sense at all, even if the show had been subtly telegraphing it for several seasons. Her being the one to do it isn’t the slightest bit satisfying narratively speaking.

Her “kill list” has had a lot of names, but the Night King was never one of them. In fact, she had never even seen a White Walker before this episode. Her central conflict lies elsewhere.

If Arya ends up killing Cersei before this is all over, that would be a satisfying moment. Even more satisfying than the time she took out all the Freys for what they did to her family. Arya is a Stark. She is the force of vengeance for the many crimes that have been committed against her family throughout the series. The last person that Arya needs to kill is Cersei, for the role she played in the death of Ned Stark. Arya was there to witness it, and it became the inciting incident that began her journey to become a faceless man. Since then, she has slowly but surely checked off all the names on her list, whether by killing them or seeing that they’re actually good people.

Arya being the one to kill Cersei would finally be justice for her family and it would conclude the journey she started so long ago.

But the Night King?

That kill belonged to Jon.

Jon started his journey by joining the Night’s Watch, a brotherhood charged with defending against the undead. For much of the series, Jon and his storyline have been very disconnected to all the politicking in the south, because, he doesn’t care about the throne.

He made peace with the wildlings north of the wall and brought them south to help defend the wall.

He made peace with Dany and convinced her that the dead were the real threat, thus adding her army to Jon’s cause. He went against Dany and Sansa and everyone else to put off fighting Cersei in order to focus everyone’s attention on the fight that really mattered.

Jon’s focus on the Night King and his army led to several showdowns between the two. And each showdown between them made the eventual final showdown we’ve been waiting for that much more intense.

Jon even died and was brought back to life to continue leading his people against the army of the dead.

He is literally both fire and ice. He’s a dragon riding Targaryen and a dead Stark defender of the north brought back to life. No one has put more time and effort in fighting the Night King and his army. The war against the undead was the only thing that mattered to him.

Much like Arya’s purpose is to kill Cersei, Jon’s purpose had been to defeat the Night King.

And then when the final showdown came, Jon was nowhere to be found. He spent a good amount of time sidelined from the actual fighting because he was flying around on a dragon, or sitting around waiting. Then when he finally got the opportunity to fight the Night King, he was sidelined again.

And then, as if the show cared more about subverting our expectations than giving us something that made sense narratively, Arya improbably sneaked past a bunch of White Walkers (who were presumably standing there watching) to stab the Night King, thus ending his reign of terror in a matter of seconds. No fight sequence, just instant death.

Why not at least give us cool fight scene that shows how powerful the Night King is.

Jon’s destiny to face off against the Night King sat there like an itch, but the showrunners (and George R.R. Martin) saw fit to rob us of the satisfaction of scratching it.

Let’s not forget, this is the same show that had Jon beating Ramsey to death after the Battle of the Bastards, but showed him stopping after seeing Sansa, because he knew it was her kill, not his.

And how much more satisfying was Ramsey’s death because Sansa got to be the one to decide the manner of it, and to watch while it happened?

Similarly, if someone other than Arya had killed the Freys, the justice for the Stark family wouldn’t have felt as cathartic.

The show has finally gotten to the point where we’re beginning to see the most important characters complete their journey. The sad thing for Jon is that he didn’t get to take part in the conclusion of his. He didn’t even get to see it happen.

And what of the Azor Ahai prophecy? I guess that all meant nothing. The showrunners apparently didn’t intend to do anything with it. The problem with that is, the more you tell us something will happen only to have that thing not happen, the more unsure of what to believe the audience becomes (and not in a good way). Pretty soon everything you’ve ever said on the show becomes a pointless lie.

That prophecy has become like Blofeld’s empty threat in the painfully awful Bond film “Spectre,” in which Blofeld tells Bond that his torture device would rob Bond of his vision and his memories, only to have nothing come of it. Stop telling us things will happen if you have no intention of delivering on it.

Some people will be glad to be done with all this zombie, end-of-the-world stuff and return to the political struggle that drove much of the earlier seasons.

You’re either on one of two sides here. Either you looked forward to the impending good vs evil fight with death and it ended too quickly, too abruptly. Or you’re someone who never cared for such simple good vs evil fights, when the show had made a name for itself building up more nuanced fights between people we cared about on both sides.

Either way, putting aside all this fantasy stuff to return to reality feels a little antiquated now. After all, Jon and all his followers kept talking about how none of their petty squabbles mattered in the grand scheme.

It’s like when Frodo and company had to try to settle back into small town Hobbit life with petty squabbles over who owns the rights to Bag End after such a wild journey with high-flying fantasy adventure and world altering stakes.

But the impending apocalypse that seemed like the final battle to end all battles is now over, and the show has more things to conclude.

But that’s not all the problems with this episode. The list of “whys” is long.

Today there’s this crazy notion that the best thing you can do is subvert the audience’s expectations. If the fans expect one thing, do another – even if it doesn’t make sense, or outright shuts down all the most interesting fan theories. If anything, do it just to shut down the fan theories. It’s like screenwriters hate fans trying to come up with a resolution to their story, so they try to out think the fans by coming up with something unexpected. But in doing so, you run the risk of doing something that doesn’t feel right, or outright angers the fans.

This was not it.