E3 is over, but we’re still recapping everything that happened. We’ve done recap/impressions videos for the Microsoft, Bethesda and Ubisoft press conferences, and we’ll be covering Square Enix and Nintendo next week, so stay tuned! Even before E3 began, we covered Bungie’s live stream about the upcoming expansion for Destiny 2, Shadowkeep, and we also covered Google’s Stadia Connect to discuss the future of game streaming.

Arguably the most interesting thing revealed during the Stadia Connect was the announcement of Baldur’s Gate 3, which is being made by the makers of Divinity: Original Sin 2.

Nevertheless, the pricing and tech spec capabilities of Stadia were discussed in a fair amount of detail. It won’t be coming this year, unless you’re willing to spend $129 on the Founders Edition which comes with a special Night Blue version of the Stadia controller, a Chromecast Ultra, all of Destiny 2 (including the upcoming Shadowkeep DLC), and three months of Stadia Pro and a three month buddy pass as well.

Once Stadia is officially available for everyone (sometime next year) it’ll be $9.99 a month for subscribers, or you can play for free and purchase games a la carte – a nice option for people who either just want to test it out (or only intend to play one of the games that are available), or for people who play games, but not enough to justify a monthly fee for the privilege.

I love the idea of Stadia. I think the back-end tech is amazing. I love how fast it loads and that I can play it in a browser and swap devices quickly and easily. And maybe most importantly, I love that it offers the freedom from having to buy expensive new hardware. You could save $400-500 when the next console generation rolls around. It also boils down to another solution to solving the problem that Nintendo solved by creating the Switch. It’s another way to be able to play games at home on your TV, and then to take it with you when you leave. 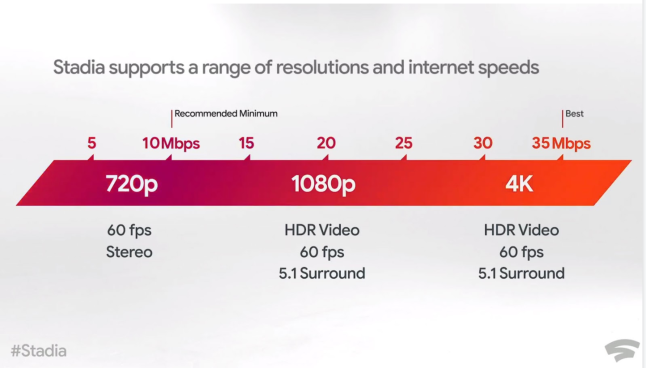 Yet ultimately the reason I won’t be buying into Stadia, at least not yet, and why I think it’s possible that it’s too ahead of its time to actually succeed, is for reasons outside of Google’s control. The quality of internet just isn’t there for most people. There are data caps, slower speeds, inconsistent speeds, even for people spending more on fiber internet.

The quality of experience you’re likely to have with Stadia will depend heavily on your router, your home network and your ISP. Game streaming services may just end up being the thing to push ISP’s to up their game, but that remains to be seen.

My Tweets
Join 176 other followers