The Battle for Spider-Man Continued…

Yesterday Deadline broke the news that Sony and Disney have been unable to agree to a deal that would allow Kevin Feige to produce more Spider-Man movies for the MCU.

Despite Sony trying to downplay things, sources told Deadline yesterday that it was about money and Disney asking for a 50/50 stake to keep Feige in control of the MCU’s Disney/Sony partner produced films. Disney already owns the merchandise for Spider-Man, and has future plans for the character in the MCU. And while the asking price is pretty steep in Sony’s eyes (Spider-Man is their biggest franchise), Feige did produce what ended up becoming Sony’s highest grossing film ever in this summer’s “Spider-Man: Far From Home.” Nevertheless, with Sony being unwilling to meet Disney’s asking price, Marvel and Feige have walked away.

However, Sony did created their own successful Spider-Man films last year with “Spider-Man: Into the Spider-Verse” (2018) and “Venom” (2018), the latter of which already has a sequel in production – a fact likely being used to try to prevent Disney from taking a larger stake.

The news that Spider-Man may not continue in the MCU has fans on social media unhappy, to say the least, and their negative tweets are adding to the pressure on Sony to work out a deal even if Disney refuses to budge. Some Twitter users are even accusing Disney of using bot accounts to tweet a nearly identical line about how Sony is killing everything the MCU has built up to this point in order to apply more pressure on Sony to agree to the deal. 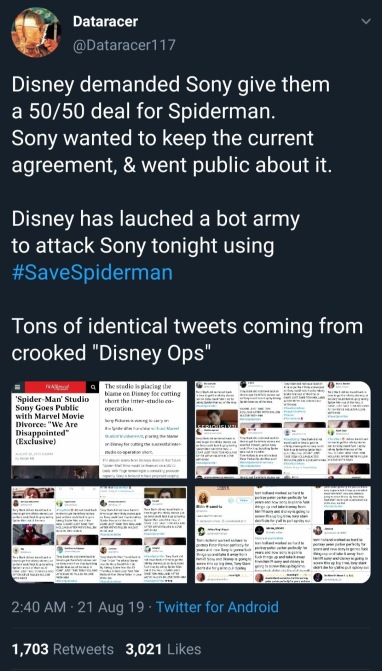 Even if you don’t buy the conspiracy theories, others on social media are expressing their discomfort with the idea of Disney throwing its considerable weight around to scoop up even more properties.

On the one hand, Sony has started making successful films in their own Spider-Man franchise. On the other hand, Marvel and MCU fans want to see where things are headed after “Far From Home” ended in a bit of a cliffhanger.