Amazon’s latest original film is a visually gorgeous telling of a piece of real history with a few alterations.

Based on Richard Holmes’ book “Falling Upwards: How We Took to the Air,” “The Aeronauts” follows James Glaisher (Eddie Redmayne) and Amelia Wren (Felicity Jones) as they took to the skies in a hot air balloon in 1862 London. Their flight is significant not only for exceeding 23,000 feet breaking the record for highest manned flight, but also for all the scientific data Glaisher was able to gather.

For Glaisher the flight is as much an opportunity to learn more about weather patterns and how to predict them as it is an adventure into the unknown. Wren is the more experienced aeronaut and she’s needed for her knowledge on the subject.

Once they take flight, a series of flashbacks intercut throughout the flight reveal both characters’ backstory, including briefly who they were before the flight and what drove them to it. Glaisher is a bit of a black sheep in the scientific community. He tries to inspire the Royal Society with his dream of exploring new heights to learn how to predict the weather, but he’s laughed out of the building. Wren is in a bit of a depression caught between societal expectations and dealing with a recent tragedy. 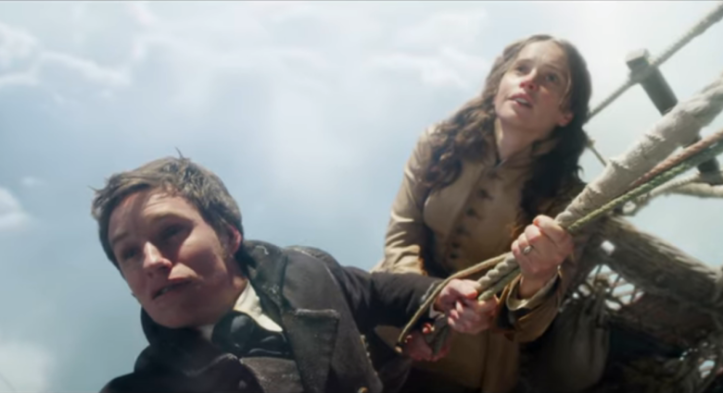 Both Eddie Redmayne and Felicity Jones are good, as they usually are. They previously worked together in 2014’s “The Theory of Everything,” for which Redmayne won an Oscar for his performance as Stephen Hawking. Here they have just as much chemistry, but both roles are somewhat less demanding.

It’s an attractively shot film with breathtaking views as the balloon continues to climb higher and higher. The special effects are, of course, convincing.

Yet, while I think the film works on most levels, and may even be perfectly acceptable in a vacuum, a brief bit of research will reveal that historical accuracy isn’t one of those levels.

Glaisher did, in fact, reach a new altitude record during a coal gas balloon flight on September 5, 1862. However, he did so with a colleague by the name of Henry Coxwell, who not only doesn’t receive any sort of acknowledgement for his part in setting a new record or for saving Glaisher’s life, but has been gender swapped out of his position in history altogether.

Certainly there’s nothing wrong with strong, heroic female characters. Quite the opposite, they’re to be celebrated as much as any other strong character. However, it’s a shame that Hollywood has decided to revise history in order to get there.

Felicity Jones’ Amelia Wren is a fictional character, an amalgamation of Sophie Blanchard the first female balloonist, and Margaret Graham, a British entertainer and aeronaut, and of course Henry Coxwell.

This will undoubtedly cause some eye-rolls from those who would have preferred a more historically accurate film. The real shame is that there are real historical accounts of women of science making discoveries while overcoming the misogyny of their era. Any one of these stories could make for a compelling film, as would the real story that this film is based on.

Surely the film uses the phrase “inspired by true events,” rather than “based on true events.” Yet the moral question remains: “what responsibility does Hollywood have to history and the real life figures their movies are inspired by.”

I tend to be in agreement with the Head of Library at the Royal Society, Keith Moore, who said, “It’s a great shame that Henry isn’t portrayed because he performed very well and saved the life of a leading scientist.”

Worse yet, the producers even made claims about how important authenticity was to them in the shooting of this film, while literally overwriting one of the key figures in the story.

“‘It was exceptionally brave climbing up into the shrouds,’ said Mr Moore, adding that it is wrong to replace Coxwell with a fictitious female for another reason.

There were so many deserving female scientists of that period who haven’t had films made about them.

Why not do that instead?’”